This article demonstrates what LINQ to SQL is and how to use its basic functionality. I found this new feature amazing because it really simplifies a developer's Debugging work and offers many new ways of coding applications.

For this article, I have used the Northwind database sample from Microsoft. The database is included in the ZIP file or can be found on the Microsoft website.

What is LINQ to SQL

The LINQ Project is a codename for a set of extensions to the .NET Framework that encompasses language-integrated query, set and transform operations. It extends C# and Visual Basic with native language syntax for queries. It also provides class libraries to take advantage of these capabilities. For more general details, refer to the Microsoft LINQ Project page.

LINQ to SQL is a new system which allows you to easily map tables, views and stored procedures from your SQL server. Moreover, LINQ to SQL helps developers in mapping and requesting a database with its simple and SQL-like language. It is not the ADO.NET replacement, but more an extension that provides new features.

How to Use LINQ to SQL

In this section I'll show you how to use LINQ to SQL from the start, at project creation.

The Object Relational Designer is a design surface that maps a database table into a C# class. To do that, just drag and drop tables from the database explorer into the designer. The designer automatically displays the tables in a UML way and represents the relationship between them. For example, I have dragged and dropped the four tables Customers, order, order_Detail and Product, as shown below: 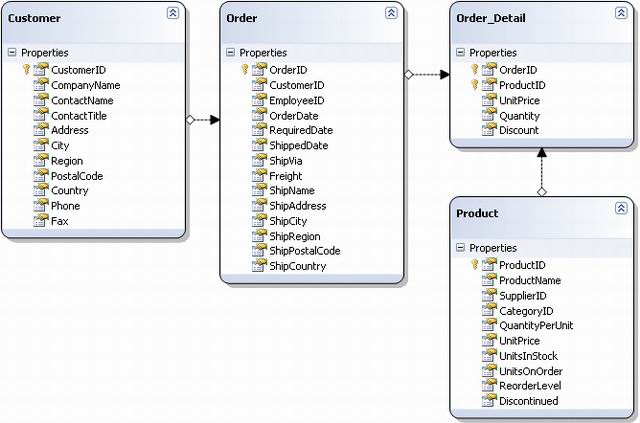 This keyword is used when you do not know the type of the variable. Visual Studio 2008 automatically chooses the appropriate type of data and so does IntelliSense!

Once the database is modeled through the designer, it can easily be used to make queries.

Query the Customers from Database

Query the Customers with a Simple Statement

Query Specified Columns Only, Returning a Collection of a Specified Class

Use a very simple class definition.

Query Specified Columns Only, Returning a Collection of an Undefined Class

This example demonstrates how to use an anonymous class that is (in this example) composed of two strings. The aim of this feature is to create a new class for temporary storage that the developer does not want (or need) to declare. It may be useful in some cases where the declaration of class is used only for storage.

For example, in the sample 4a, the class CMyClassTwoStrings is used only to create the interface between the query engine and the output in the console. It is not used anywhere else and is a loss of time. This new way of writing enables the developer to create temporary classes with an unlimited number of attributes of any type. Every attribute is named, either by specifying the name with Name = c.ContactName or by leaving the attribute without, i.e. Name =. IntelliSense also works with anonymous classes!

This example demonstrates how to specify the relation between tables' joins on an attribute.

Query with Tables Joined through entityref

In this example, the entityref property is used. The class orders have an attribute named Customer that refers to the customer who realizes the order. It is just a pointer to one instance of the class Customer. This attribute gives us direct access to customer properties. The advantage of this feature is that the developer does not need to know exactly how tables are joined and access to attached data is immediate.

Query in the Old Way: with SQL as String

LINQ to SQL provides a new way of managing data into database. The three SQL statements Insert, Delete and Update are implemented, but using them is not visible.

To make modifications to a database, just modify any relevant object properties and call the method SubmitChanges().

To insert a new entry into the database, you just have to create an instance of a C# class and Attach it to the associated table.

Deleting data is quite easy. When requesting your database, give a collection of data. Then just call DeleteOnSubmit (or DeleteAllOnSubmit) to delete the specified items.

IntelliSense works into the query definition and can increase developer productivity. It's very interesting because it pops up on DataContext, tables and attributes. In this first example, IntelliSense shows the list of tables mapped from the database, the connection instance and a lot of other properties. 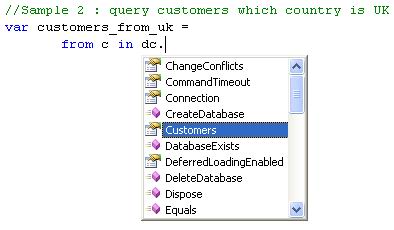 For a table, the list contains all of its columns: 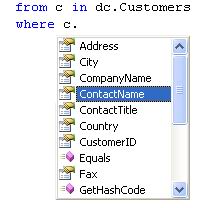 For an attribute, it will display methods and properties depending on the type (string, integer, etc). 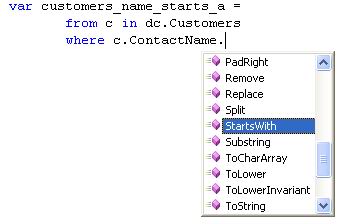 The query is not yet executed; it is just compiled and analysed. In fact, the query is run when the code makes an access to the customer variable, like here:

Other LINQ to SQL Options

LINQ to SQL supports deferred loading options. This functionality allows a user to modify query engine behaviour when retrieving data. One of them is the deferred loading that will load all the data of a query. As an example, a query on the order table gives you entry to the customer properties by entityref. If Datacontext.DeferredLoadingEnabled is set at true (default) then the Customer attribute will be loaded when an access to the order entry is made. Otherwise (when at false), it is not loaded. This option helps a developer when optimizing requests, data size and time for querying. There is a good example about that here.

When the function SubmitChanges() is executed, it starts by verifying if there is no conflict that occurs by an external modification. For a server/client application, the application must take conflicts into account in case multiple clients access the database at the same time. To implement conflict resolution, SubmitChanges() generates a System.Data.LINQ.ChangeConflictException exception. The DataContext instance gives details about conflicts to know why exactly they throw. I wrote a basic conflict resolution, but I will not give the full details of all other possibilities because I think it should be an entire article.

If you want more details about conflict resolution, I suggest you to refer to this page (in VB).

As a conclusion to this article, I summarize the important points of LINQ to SQL: