This code replaces an earlier version which is still available

The Android SDK provided by Google doesn't provide any camera emulation beyond a stand-in animation (see below). Since Google haven't yet provided a working implementation (or even a date by which one will be available), I'm publishing the source code for a set of temporary classes that I wrote to overcome this limitation. It's the first code I wrote on the Android platform, and it was written in haste, though it has functioned very well for me.

The code is public domain. I make no warranty as to its fitness for any particular purpose.

The code consists of:

When drawing the output of the genuine camera to screen, you will see something that looks like this: 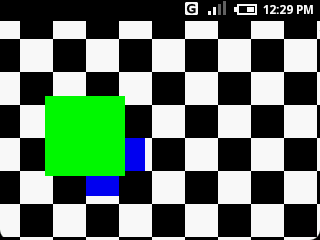 When drawing the output of a remote camera that is obtaining frames from a running webcam broadcaster you would see this (if you were stood over my desk). 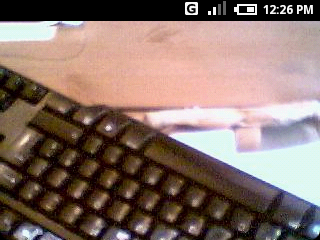 Still obtained from a webcam broadcaster.

To save myself more time, I chose to produce a small settings configuration activity too (the code for which is not included). 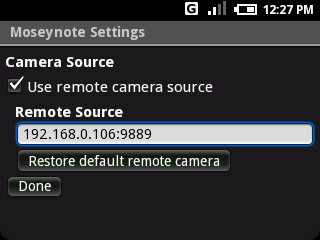 A simple configuration activity for the camera settings.

The HttpCamera implementation should be able to obtain stills from any HTTP serving webcam or webcam software. At present I am using WebCam2000 which I run under Windows XP.

Fabian Necci kindly emailed me to let me know that he has successfully used this code on a MacBook using EvoCam to publish JPEG frames to an internal web server. Other software should be available on other systems.

Torben Vesterager has used the code with his MacBook Pro laptop which has Apple's own iSight built-in. He reports that the camera only supports YUVFormats and so had to change the code in the WebcamBroadcaster to use YUVFormat instead of RGBFormat.

Jeffrey Sharkey has used Gentoo Linux with a Logitech QuickCam express using the WebcamBroadcaster and the Linux-native JMF library. He followed this by using DV4Linux to get JMF to recognize his firewire MiniDV camera. This gave him much clearer pictures in Android; he wrapped his JMF calls using the dv4lstart utility:

If you successfully use this code on a platform other than those listed above, or have used other webcam software, please let me know so that I can include it in this documentation for the benefit of others.

The SocketCamera implementation relies on a WebcamBroadcaster to be serving webcam stills from the address & port specified in its constructor.

To run a WebcamBroadcaster you will need JMF installed and you may need to supply the library location to the JVM when you run the application (this depends on how you install it). For example, on my machine (currently Windows XP) I use:

You can pass the following combination of parameters to the application, all of which are strictly positive integers (all dimensions in pixels):