This code is not production ready; it is designed to demonstrate a theoretical solution to using COMET in ASP.NET. This article covers the server-side implementation of COMET and how to combat the scalability problems. To demonstrate the client code, I will release a smaller article soon which demonstrates a small tic-tac-toe game using the COMET thread pooling mechanism I mention below, which should give you some idea about using it in a real world application.

Over the past six months, I have been putting together an online chess application where players can register, login, and play chess in real-time. One of the obstacles I had to overcome was how to implement a real-time communication between the client and the server. For this to be successful, a number of factors need to be addressed:

So, I evaluated up all of my options. My first prototype used a standard AJAX mechanism which polled the server; this created too much latency and too much traffic, so I quickly moved on from this. I researched other mechanisms of transport, such as using socket communication via a hidden Flash applet; this required a browser plug-in, and so I moved on. I then found the COMET idea, and thought, bingo, this is what I want to use, so I did some more research and built a prototype.

The idea behind COMET

This mechanism solves the Performance requirement; it means that whenever a message is needed to be sent to the client, and if a persistent connection is open, the client should receive it with very little latency, almost instantly.

Real world use implementation of COMET

So far, everything looks great on paper; we have a mechanism that can deliver messages to a browser in real-time without a plug-in, but in practice, this is much more difficult. Many articles that describe the features of using a persistent connection comment about how much of a "hack" this is. I tend to disagree with these statements.

It is true that COMET can run into issues when running on some browsers (mainly because HTTP imposes a two connection per browser, per host limitation). This limitation of the HTTP protocol was implemented to provide better performance for normal browsing over low bandwidth connections (e.g., dialup modems), and can cause performance issues when running COMET (there are ways around this!). This issue is only really noticeable in Internet Explorer (I think IE is strict with this standard up until IE8); Firefox 2 allows more connections, and manages them better, and Firefox 3 allows even more, meaning the future for COMET style applications is bright.

The second issue comes from the scalability of the technology, and this is mainly what this article is trying to remedy. This issue is present because the platforms lack the support for a COMET style protocol, and presently do not scale well when using persistent connections. I would say this is not a failure of the overall idea of COMET, rather a failure of the implementation of a specific COMET server.

Other developers have put together servers that sit in front of the platforms we develop on, these allow us to separate the COMET request mechanism from the web server, and allow the solution to scale by managing their own persistent connections. What I will demonstrate in this article is how you should not use COMET in ASP.NET, and the possible solution.

The major drawback with persistent connections to ASP.NET is that each connection consumes an ASP.NET worker thread for the five seconds that the connection is open. Therefore, each client that connects will hold a thread from the ASP.NET thread pool and, eventually, under load, the server will stop responding.

To demonstrate this, I put together a very simple application to simulate persistent connections to an ASP.NET application, with a handler that holds the requests open for 5 seconds before returning to the client:

This handler is very simple, it holds the execution of the request up to for 5 seconds, then returns. This simulates a COMET request that would eventually timeout and return the client.

I also wrote a console application that ramps up WebRequest calls to the CometSyncHandler handler. The results were pretty much as expected; each client used an ASP.NET worker thread, and eventually after 40 or so connections, the website started to underperform, and page requests started to respond very slowly.

The screenshot below shows this happening: 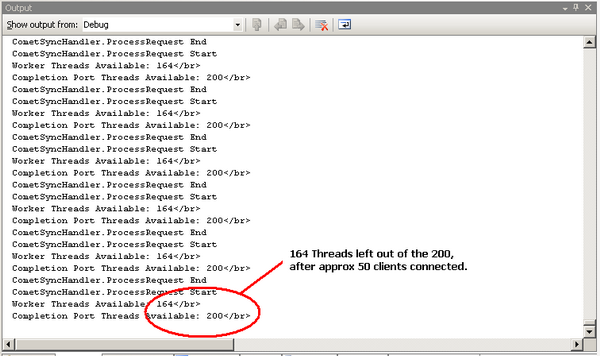 I ramped up approximately 50 connections with two instances of the CometClientSimulator application, and as the website performance dropped, it started to drop connections from the simulator. To repeat this test, you can open and Debug the CometAsync website, which would open default.aspx and set everything running, then open an instance of the CometClientSimulator console application and type addsyncclients; this will then ramp up 25 clients, adding one every two seconds into the ASP.NET application.

Clearly, this is no good for any real world application, so I did some digging and devised a solution.

This is the first part of the solution. This little piece of magic allows us to run code asynchronously on the web server when we service a request to a handler. If you are not familiar with IAsyncHttpHandler, then read my brief explanation of how it works below:

The sequence diagram below shows how this would work:

The sequence diagram above introduces a custom thread pool for servicing the COMET requests that sits around on the server. This is required because we don't want ASP.NET to use one of its threads while waiting around for a COMET request to timeout.

The code for this pooling mechanism is located in the website in the CometAsync folder. It contains the following files:

This implementation works by first creating a set of background CometWaitThread objects that each contain a single thread that processes the CometWaitRequest queue items. In our web application, we would initialize the thread pool in Application_Start in the global.asax file.

This fires up five threads that idle along in the background, waiting for CometWaitRequest instances to service.

Our CometAsyncHandler than waits for requests from the client; its responsibility is to queue the requests in the thread pool.

The BeginProcessRequest outputs some Debug information so we can keep track exactly of what threads are available, and then creates an instance of a CometAsyncResult class that tracks the HttpContext and is used to return to ASP.NET to indicate it has started an asynchronous process. Before returning, it calls BeginWaitRequest, which adds the request into the thread pool.

This code creates a new instance of the CometWaitRequest object and queues it in the thread pool.

This logic picks a CometWaitThread to assign the CometWaitRequest to, based on a round robin approach (e.g., if thread 1 received the previous request, thread 2 will receive the second).

The request is added into an internal list of CometWaitRequest objects in the chosen thread.

The QueueCometWaitRequest_WaitCallback is the entry point for this thread, and was started way back in Application_Start. It has been cycling around in a loop, waiting for a CometWaitRequest item to appear in its queue; once a client requests the CometAsyncHandler handler, one will be present.

It processes each item in the queue in a sequenced order in each loop iteration, e.g., if there were three requests pending, it would check request 1, 2, then 3, then continue the loop and process request 1, 2, and 3 again. This ensures that each request is processed as soon as possible without having to wait for a previous request to finish its 5 second timeout.

The loop checks to see if the CometWaitRequest has been in the queue for longer than the predefined timeout (in this case, 5 seconds); otherwise, it checks to see if there is an event waiting to be sent back to the client. If either case is true, it completes the CometWaitRequest, returning the desired response object, and then removes it from the queue.

This method responds to the client by serializing whatever response object we set in the completion into the response stream of the request's HttpContext.

One thing to mention here is what threads are actually doing the processing of the request. When it arrives in BeginProcessRequest, it is an ASP.NET worker process that is executing, and when the CometWaitThread has completed, either with a timeout or a message, the EndProcessRequest method is executed on one of the CometThreadPool threads, meaning that ASP.NET has only used one of its thread pool thread for the initialization of the COMET request, the remaining 5 seconds were processed without an ASP.NET thread.

We can see that in action in the following screenshot:

At this point, it is also worth mentioning that the response from the website is very good, considering there are 200 persisted connections, and the CPU/memory usage for the box is good (it is also running the clients).

To also double check everything is working smoothly, I log a counter for each request and response pair to ensure that each request is met with a response. The screenshot below shows this output from running the test with 200 clients for five minutes: 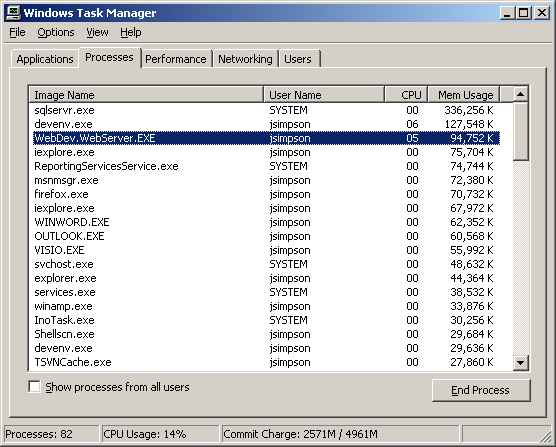 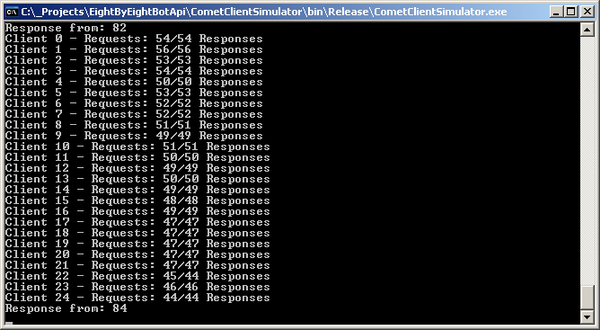 This shows that all the requests were complete successfully, (apart from 1, but I put that down to a small race condition in the shutdown code, you can see it completes after!).

The website project CometAsync will execute and provide a default.aspx page that lists the amount of available threads available to ASP.NET when that request executes.

The CometClientSimulator application will simulate the client connections; it should be executed as follows:

I am currently using a similar engine on my chess website, but it is undergoing vigorous testing right now. By the way, if anyone’s interested in playing chess on there and wants to help out with the testing, drop me an email at imebgo@gmail.com. Thanks!

This article, along with any associated source code and files, is licensed under The Code Project Open License (CPOL)